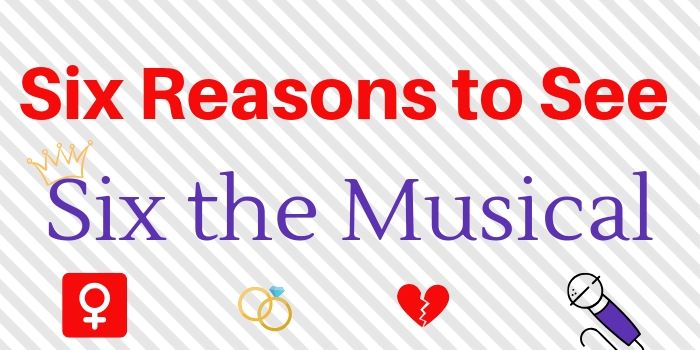 The six wives of Henry VIII + sassy pop music = one of the best theatre shows in recent years… who knew?

Six may be a hit in the West End (and now over in Chicago too!) but if you’ve yet to see this amazing show about girl power and rewriting history to turn it into “herstory” (see what they did there??!), I’ve got six reasons why you need to give Six a shot.

No.1 It has an all-female cast and band

Theatre is traditionally populated with more men in the significant positions than women. A couple of months back the National Theatre came under fire for not including any plays with a female writing credit in their upcoming season. Women are so often overlooked off the stage so to see a show where ten talented and diverse women are on the stage every night is so refreshing. Henry VIII doesn’t make an appearance in the show because, for once, the story that’s being told isn’t really about him, it’s about the six fascinating and fabulous women he royally screwed over.

No.2 It’s contemporary theatre at its finest

Each queen’s song style takes inspiration from some modern-day muses, from Ariana Grande to Adele. This means that though these ladies are from Tudor England, nothing about this show feels stuck-in-the-past, in fact it’s about as contemporary a show on the West End can get. There are catchy tunes with pop and RnB vibes and you can learn a lot about history in a way that is a lot more fun than opening a textbook.

No.3 It rewrites history from the women’s points of view

The separation of Henry VIII and Catherine and Aragon so he could marry Anne Boleyn is one of the most significant events in English history for bringing about the English Reformation but this is a story that is always taught from a very political and *yawn* male angle. If that’s not tiresome enough, all four other wives of Henry VIII are pretty much always glossed over when this topic comes up in school. To steal a quote from Cathy Parr in Six “there’s so much more” to them than meets the eye. I could tell you all about the amazing things these queens did and their truly awful experiences during their reigns but I don’t want to spoil anything so just go and see the show, it’s all based on real fact just told in the sassiest and catchiest way possible.

No.4 It’s a new British show

Ok, I’m not trying tot get into a debate about whether new British theatre is overshadowed by the Broadway shows that have been coming over to the West End of late. I’m certainly not hating on the Broadway-to-West-End hits either, I was one of the first in the virtual line to get tickets to the likes of Hamilton, Waitress and Come From Away (all fantastic shows, I might add) but it does feel like new British shows are sometimes lost in the sea of already-popular Broadway hits. Six has managed to gain a strong following online (with one of the sweetest fanbases I think I’ve seen for anything but more on that soon) and rightfully so because it’s so damn good. The writing team behind it, Marlowe and Moss, came out of university and got a show on the West End nearly straight away, those are some top musical-writing skills right there!
No.5 Every. Single. Song. Is. A. Jam.

Who doesn’t love a sassy feminist bop? In this show there are half a dozen sassy solo bops with three pretty unique ensemble numbers thrown in as well. Sure, the show might be short with only nine shows in the whole performance but those nine songs were chosen wisely and each one serves a clear purpose (even if Haus of Holbein is a bit weird). The cast album is short and sweet and the songs sound like something you’d hear on the radio yet still have that magical musical theatre quality to them so what’s not to like?

No.6 It appreciates its alternates

The cast is terrific and if you don’t come out of the show wishing you were a part of that girl squad, you’re lying to yourself. And when I say cast, I mean the whole cast. Including the three fabulous alternates. Back when this current cast first took the show to the Edinburgh Fringe, quickly followed by its first run in London, there was one alternate, Grace Mouat, who covered every single queen. How? Some serious talent and presumably a bloody good memory. Since then, as the show’s grown so have the number of alternates. Now Grace is joined by Vicki Manser and Courtney Stapleton and for the first show where all three alternates were going to be on together, the Six Instagram shared a video hyping the audience up to see them all perform! No other shows do that! And they should! It’s created the nicest fandom in the West End. I never see any nasty tweets from people who were sad not to see the main cast because the alternates are so celebrated that audiences treat seeing the alternates like catching Pokémon – you want to see them all! That’s amazing and how I really think theatre should be.

Have I convinced you yet? Go book some tickets and listen to the songs – they’re all on Spotify waiting for you!

How can I see it?

Six is on at the Arts Theatre in London and will be going on a UK tour later this year.

There is also a production in Chicago at the Shakespeare Theatre.