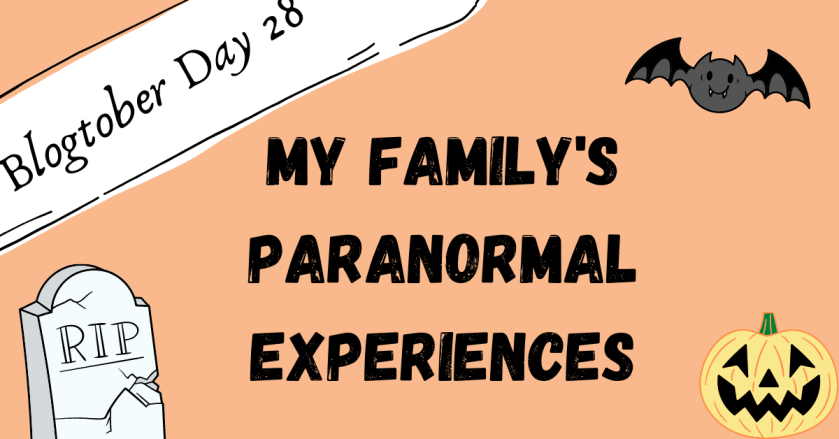 We’re so close to Halloween now! To honour the fast approaching spookiest day of the year, I thought I’d do something a bit different for today’s Blogtober post. Here are some weird things that have happened to me and/or my family members that are possibly paranormal.

Poltergeist in the house?

This is one that my mum has told me about as it happened before I was born. When my mum and dad first moved in together, for a short while they lived in a house only a stone’s throw from the one we live in now. It was a brand new semi-detached property with nothing obviously spooky about it, except from the wealth of weird things that happened there. One time they went out only to come home and discover all the windows were open when they had been shut when they left, another time they got back to the house to find all the clocks set to different times. Things would move and turn up in places that both mum and dad were sure they hadn’t left them and the kitchen tap turned on by itself. Most spooky of all was when there was a powercut and my mum was carrying a candle up the stairs to light her way in the dark when the candle suddenly went out and she felt a presence right before her. She told it to go away and the presence seemed to move off. Eek, I don’t think I’d have been so brave.

This one involves my Nan and again happened way before I was even born but she has told this story the same all my life so I definitely believe her. She was walking home from the shops one day and had to stop on the route to put the heavy bags down for a moment before continuing on the journey. When she did, she happened to glance up at the sky to see a grey cigar-shaped object which then shot off with flames firing out the back. When she made it home no one believed what she had seen until the next day’s local newspaper reported that the teams coming off a nearby football pitch had seen the exact same thing.

Ok, exciting times for me because I’m actually in this one. This one relates to my Nan, not the one in the last story, my grandmother on the other side of the family. She was a big spirit in life, she loved her family and putting on a spread for us all when we went around, even if she was a bit old-fashioned. After she died, we kept feeling like she wasn’t really gone. We had a few weird electrical faults and the song we were going to play at her funeral seemed to come on the TV or radio every time we mentioned her (it still did for a long time afterwards). Then the funeral happened and we all went to a local function room for the reception. There was a jukebox in the room but obviously they knew no one would be playing tunes at a funeral reception so it was switched off. But, somehow the jukebox burst into life and starting playing, of all songs, Every Breath You Take by The Police. In the end, someone went and unplugged it.

Also, I don’t fully know how to explain this one and this really did only happen to me so I haven’t got anyone else’s words or recollections to help me here so bear with me. One time I was at her house, visiting my granddad and I had a glass of orange juice while I was there. My parents arrived to pick me up so I was going to take the glass to the kitchen and wash it up but as soon as I attempted to take a step into the kitchen, I was filled with an overwhelming feeling. The only way I can describe it is that it was like a wave crashed over in my mind and suddenly I was thinking about her, only her, and it was so sudden and fierce I stopped dead in my tracks and felt frightened – not by her, just by the feeling. I’ve never experienced anything like it before or since. I feel like maybe it was her way of saying to me not to worry about washing up that glass, she was such a keen hostess in life, I know she wouldn’t have wanted to clean up at her house if she was there. I ended up just reaching into the room from the doorway and leaving the glass on the side.

This was a very different post from me as I don’t usually talk about my family on this blog but I hope this was interesting. I know these experiences aren’t nearly as extreme as what some people have seen but I promise they are all true. Feel free to share any spooky experiences you’ve had in the comments because I love hearing other people’s stories. Bye for now!